The mechanic was supposed to see my car today. He was going to try to pin point more or less what the problem could be, my ex would tag along too and hear how expensive this would all come out to.
My mechanic doesn't own a functioning watch I think, he's never on time, he'll say I'll be there in an hour and show up five hours later.

In the meantime, my ex husband decided we should kill time at a Thrift Store.
The mechanic was still far away from coming to look at the car so this seemed like a good idea instead of sitting awkwardly in my apartment for a few hours.

In the Thrift Store my daughter, ex and I scoured the place for things we didn't really need, but you know how that goes.
I was thinking about getting a dish set if I could find an affordable set, my current ones are more impractical than anything, time for an upgrade.
I found a cute set that was just the right price.
My ex found some shoes and my daughter found a Beanie baby she loved.

I'm in the aisle with the books, and I'm also babysitting the buggy with all our found spoils. Suddenly there are two men who get into a conversation about my Dish set.
The first man, is very tall, brunette, and has the brightest shade of green eyes I've ever seen. His eyes were like marbles, beautiful to look at.
The second is a shorter older man, he's dressed in clothing not appropriate any more for his age, he sports a full beard, almost white, and has a thick accent. He's a New Yorker.
The New Yorker is one of those savvy Thrift store shoppers that is always on the hunt for rare finds, my Dish Set was complimented then analyzed.
The first man was like me, suddenly enveloped in conversation he wasn't expecting. After awhile the first decides to go, he's heard enough.
The New Yorker keeps going on and on about things he's found, apparently my Dish set was made in China and he doesn't like that, says anything made there is no good. He recommended European or Japanese.
I nod my head in agreement, frankly it doesn't make a difference to me, but sometimes you just have to be polite and I almost always am.
The conversation turned from Dishes to Books.
He's a James Patterson fan. I know many of them, and they all try to convince me to cross over. I think I might, my only question is this, for any other James Patterson enthusiast, what would be a good first read since he has so many?
The New Yorker kept on and on with his suggestions. I found a book I wanted to read and suddenly was wishing he would be finished with his distracting banter.
My ex and daughter come finally and things take a turn.
My daughter runs up to hug me while my ex stays a little behind quietly taking everything in. The New Yorker says my daughter and I look alike and keeps on talking, finally the conversation starts to dissipate and I couldn't be more grateful.
The book I picked out is "The Namesake" by Jhumpa Lahiri.
I've read this book once already, it's one of my favorites, it's beautifully written and so emotional. I recommend this.

We head to the checkout and my ex starts questioning my conversation with The New Yorker, he's actually jealous.
I immediately get infuriated. He has no reason to be, and more importantly no right, he's nothing to me, I'm sick to death of telling him this.
The car ride home is torture, I can already see the gears turning in my ex's head, this will not end well..
At home, I give my daughter lunch and shoo her away, in my bedroom my ex and I have it out.
He's willing to fix my car with strings attached.
I can't do this anymore. I won't.
I'm seeing someone else, I have a boyfriend now, as a matter of fact I just told my boyfriend this weekend that I was in love with him. He's a great guy and makes me feel amazing. I feel very fortunate to have him. He makes me extremely happy. I don't care what we do as long as we're together that's enough for me.
My ex needs to butt out of my life and move on with his, no more games, enough.
I tell him basically that there will never be an "us"again. I'd rather walk everywhere and have a broken car than take his money and be in an awkward situation with him, somehow feel indebted to him even.
My ex doesn't like this one bit and goes ballistic.
First he cusses me out and says things like I'm an unlovable person, that I'm a bad mom and broken, I'm messed up, etc.
Then it just escalates finally before he leaves for good.
I was incredibly distraught because my daughter was with him and I worried for her safety.
In the end though, I know he wouldn't hurt himself or her over this. It just took me a minute to get this.
So no car repair after all.
My ex won't flip the bill and right now I possibly can't.
Later on today I b/p 1x and tried to settle down, sleeping was one thing I tried but couldn't. Too many concerned people texting or calling me which is fine in the bigger scheme of things.
The mechanic shows up finally hours later with a Volkswagen's expert assisting him. My ex comes too.
The problem is two possible outcomes.
If it's the first then we're looking at 800$, if it's the latter of the two then it's 1,200 plus labor.
The mechanic has a pow wow with my ex across the street. The mechanic suggest I sell my car, he can possibly get me $3,000 he'll try to sell it "as is" and for more then it's worth, he'll pocket the difference of course.
My ex keeps asking me what I'm going to do, he can't fathom me just letting the car sit there broken. I go off on him and the mechanic watches.
Finally everyone goes home and I'm left with nothing but heartache.
I tried to work out but couldn't. I was too distraught, the sobbing started up and I physically felt bad.
I'm drinking now and thinking a bit clearer.
I guess I just have to accept this. I have to just keep moving on with my odd life.
I can't control this outcome, so I have to just let it go and let God.
I was thinking about continuing to b/p till I couldn't anymore followed by a lax binge, but I won't.
I'll just drink and blog, maybe talk to my sister again and distract myself.
No more hurting myself today.
My weight is bad, I feel fat.
I want nothing more than to lose weight, my ED craves an emaciated Lou, but I can't.
I have to fight that everyday. I have to fight that longing for lower digits and bones protruding. This is hard. How much I lose seems to be all I'm capable of controlling, of allowing. It's the one factor that has nothing to do with daily struggles and unforeseen problems.
I have to make different choices because the old ones never work.
I'm sad today, I feel like no matter what I do things just keep piling up on me. It's really hard to be positive, my heart aches. I can't understand, when will I catch a break?
When does the hurt stop?
I hope to feel better tomorrow. I'm on day two of taking all my meds again, maybe soon I'll regulate for good.
Maybe I can be okay.
﻿
at June 11, 2012

Reading your blog, your writing and words today almost felt and sounded poetic to my ears and heart, you are truly an inspiration to so many of us Lou., i hope you keep fighting for your life, your happiness and allow us the privilege to continue reading and be inspired by said fight .. We love you Lou, hang in there hun the tide will turn 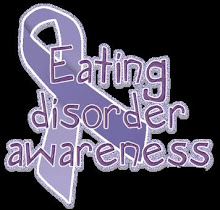 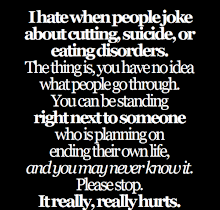 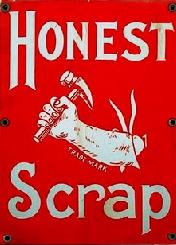 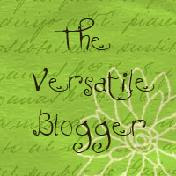 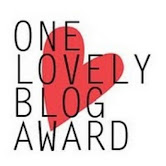 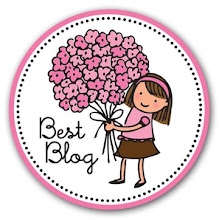 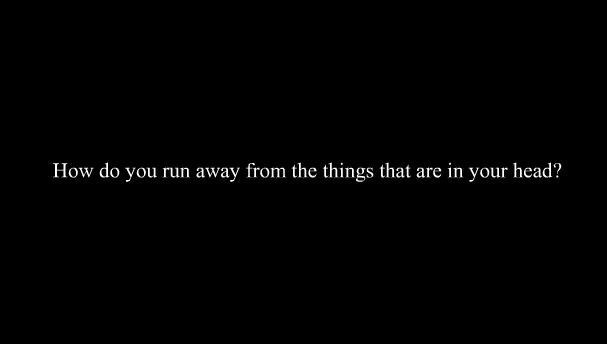